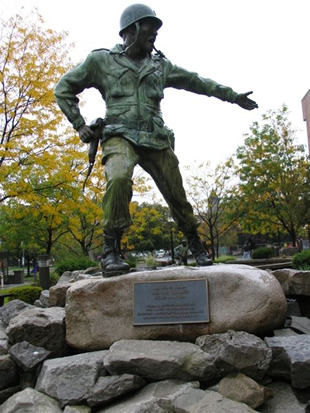 Within one month of the U.S. try into World War I, the University sent a letter to the President of the United States "affirming the patriotism and allegiance of the resident of the Ridge ". In response to a state law requiring a certain amount of drill each week, military training was ratified by the faculty and became part of the collegiate curriculum.  In 1917, the entire male student body drilled, sometimes as much as 10 hours per week, aided the informal supervision of a Drill Sergeant from the then-active Fort Niagara.  In early 1918, Fr. Joseph M. Noonan, C.M., organized the Student Army Training Corps (S.A.T.C.).  This Corps, with a strength of about 200, was barracked as a group in Alumni Hall.  The entire student body continued drill under the direction and guidance of two Lieutenants from Fort Niagara and selected Cadet officers.  The quasi-organizations of 1917-18, although divorced from official Army regulations, were Niagara University's first direct experience in military activities.

Establishment of the Reserve Officers' Training Corps at Niagara

Formal application for the establishment of a senior unit of the Reserve Officers' Training Corps at Niagara was made to the War Department by the Very Reverend Joseph M. Noonan, C.M., President of the University, in October, 1935.  Initial plans called for the initiation of a motorized Field Artillery unit.  Representatives from the War Department, after a tour of the campus, came to the conclusion that Niagara's location, terrain, and proximity to Fort Niagara were suited for such a unit.  The first commissioned Niagara ROTC class began in April of 1936 and graduated sixteen cadets in 1940.  No Cadets were given their commissions at Niagara's Commencement Ceremonies for the years 1943-1947.  As the task of procuring officers was temporarily transferred from ROTC to Officer Candidate Schools, ROTC was more and more phased from Niagara's curriculum... leaving just the two-year basic course.  Of the Niagara Cadets completing the two-year Basic Course who went on to enter the services, 69 percent were subsequently commissioned.

In March 1945, Major Frederich A. Tillman was assigned to Niagara as Commandant of the 1288th SCE-ACER, an Army Air Corps unit which prepared future pilots for flying school.  In that same month, Major Tillman received orders disbanding the 1288th and was instructed to direct his efforts towards re-institution of the Advanced Course. The commissions of 1948 are a result of the re-instituted Advance Course.  With the advent of the Cold War, ROTC again became an important institution on campus. During the Korean War, between 50-90 Cadets were commissioned annually.

The ROTC program continued largely unchanged commissioning 30-50 Cadets annually. In 1966, after two years of debate and some amount of student protest, participation in the Basic Course was made voluntary upon completion of the Spring of 1969.  Although there was a notable drop in enrollment during these years, the Corps saw its first female Cadets in the Fall of 1973, with the College of Nursing beginning to make a significant contribution to the Corps of Cadets.

Enrollment in the ROTC program in the 1980 varied from 100 to 180, with the number of commissionees ranging from 13 to 24. The program drew from all segments of the University, with females comprising an important segment of the Corps. The program enjoyed widespread acceptance among the student body and support from the faculty and administration.  In the 1990's, enrollment declined and the program was realigned as a partnership school of Canisius College in Buffalo, New York.

In 1999-2000, under the leadership of LTC John Hammill, Niagara University left Canisius College and re-established its own program.  In 2002, Niagara University closed its nursing program, ending NU's legacy of commissioning fantastic Army Nurses.  For the last five years, Niagara has been ranked in the top 10% of Army ROTC programs in the United States (of 272 programs).  In 2004, Niagara ranked # 1 nationally - proving that a small school in Western New York can compete with any program, anywhere.  Although Cadet Command no longer nationally ranks, currently, Niagara’s program is listed as one of the top 14 schools in the nation.

During the revitalization of the program in the late 1940's and early 50s, several traditions were established which carry over to the present.